It was a beautiful day for a spring wedding in Maine, almost shirt-sleeve weather…

This was Heather and Stephen’s wedding at Camp Ketcha. I was invited to partner with Chris Bouchard  of http://bouchardentertainment.com because his wife is ready to have a baby any day now. After being asked to back him up, I wanted to be sure I’d be ready to take over on the spot. The only way to do that was to actually go to the event and be ready in case Chris should get the call. You can read Chris’ post of the day here.

I arrived just in time to help Chris put the finishing touches on his setup. We had just finished setting up as the  parents and relatives began streaming in. While it was a beautiful day, and warm for a spring wedding in Maine, it was still on the chilli side at that point. Later, as guests began to file out to the pavilion for the ceremony, the soft easily recognizable sounds of favorites we know and love played by the Vitamin String Quartet.

It was windy, and there was a nice white runner placed on the ground. We had to scramble to find rocks to line the sides with so the runner would stay down in the wind. After a few minutes of anxious anticipation, the bridal party began processing in from the main building at Camp Ketcha to The Piano Guys’ Pachelbel meets U2. Once the bridesmaids had all reached their assigned places, there was a pause. The guests turned back to look. The father of the bride escorted his daughter out of the building and down the aisle. The first notes of Christina Perri’s A Thousand Years began.

The ceremony was sweet and heartfelt. The bride’s aunt was the very poised officiant. The ceremony ended with the bride and groom’s nephew announcing the new Mr & Mrs Stephen & Heather Johnson. It was one of the cutest things I have seen at a ceremony! This Will Be by Natalie Cole played as the newlyweds lead the way back the stone studded path to the cocktails and craft brew on tap awaiting inside!

The mood was festive yet relaxed as 40’s jazz filled the room. Sinatra, Dean, Sammy and their friends were all there keeping toes tapping and a nice energy in the room. Shortly after word came in that The Muthah Truckah was set up and ready to take guest orders for dinner. They had an amazing selection of custom grilled Sandwiches with optional Greek salad which was equally incredible! It was a laid back affair, with a touch of elegance. The guests were gathered loosely around the food truck. They were putting in orders, catching up with one another, sometimes meeting for the first time. They were all enjoying the natural beauty of a Maine spring wedding.

When the all clear was given Chris lined everyone up and the bridal party entered to Without You by David Guetta and Usher. Then the big moment came. The energy elevated, and the newlyweds danced their way into the room to Don’t Stop The Party by Pitbull!

A couple of excellent toasts, complete with embarrassing but humorous stories, by the best man and Maid of Honor and it was time for our newlyweds to hit the dance floor! Tennessee Whiskey by Chris Stapelton was their first dance choice, and they were absolute stars on the dance floor! Then it was Stephen’s mom’s turn to take center stage with her son. Their song was Days Like this by Van Morrison. Rounding out this exclusive dance card was Heather and her dad dancing to The Power of Love by Celine Dion, a childhood favorite.

With the dances done, the newlyweds playfully cut their cake to Love You Madly by Cake. The guests all joined the Stephen & Heather on the dance floor for a group photo, and everyone wanted to dance with somebody! The party was on! 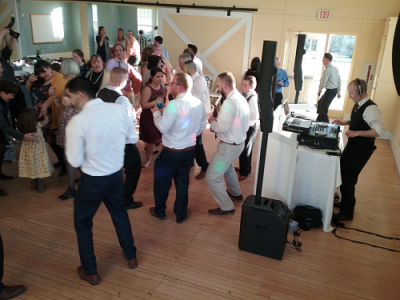 Dancing the night away!

It was a wonderful, exciting night of dancing and fun for all! The dance floor was full right until they formed an impromptu conga line to Send Me On My Way by rusted root to end the night at 9PM! – This was the lone successful photo I was able to capture. The photos from later in the night were a little fuzzy, so I am awaiting the professional photos from Clare Norton, our amazing Photographer.

Congratulations Stephen & Heather, I hope your life together is filled with love, prosperity and happiness.