On Saturday August 20 On Beautiful Power Farm in Falmouth Maine, 2 very special, fun, hard working people tied the knot, and it was an amazing day. 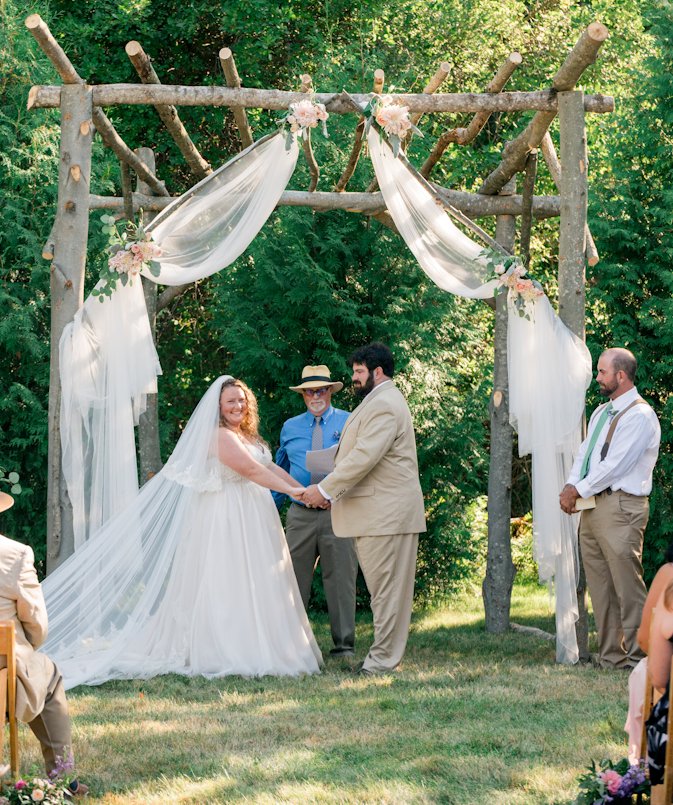 It’s rare that I am able to work with a couple whom I feel genuinely connected and can call friends to this level. Chris and Kim are those people, and I somehow don’t feel special, in that as I interacted with them and got a chance to hang out with them, I got the sense that they are simply very much that way. Warm, friendly, fun loving people both with sweet and wonderful families. In fact, their wedding was to take place on Kim’s uncles farm in Falmouth. Neither Kim, nor Chris are from Maine, but you could have fooled me. They fit right in like the state was made for them!

It was a beautiful day, it got hot for a total of about 2 hours, but was a mildly cloudy, 70 degree day. The farm was beautiful with Sunflowers and many and varied crops in full bloom all over the farm. Jeremy, the brother of the bride, built a beautiful pergola to serve as a back drop for their ceremony at the back of the field while Jamie and Janet from Big Phil Records played a beautiful mix of Bluegrass and Celtic music, 3 specific songs for their processional followed by a fun recessional song. Kim wore a beautiful white wedding gown, Her bridesmaids were in a soft light green, and the groomsmen Dress Shirts and Dress pants with Suspenders and a striped green tie. Tom Power, the uncle of the bride, and owner of the farm, officiated the ceremony, and they each recited their own vows along with a couple choice literary selections. They said I do, exchanged rings and adjourned with their wedding party to another section of the farm for pictures, while their guests headed off to the cocktail spot just a bit further up the way from the ceremony. They had an array of refreshments and an assortment of goodies and Passed Hors D’oeuvres. 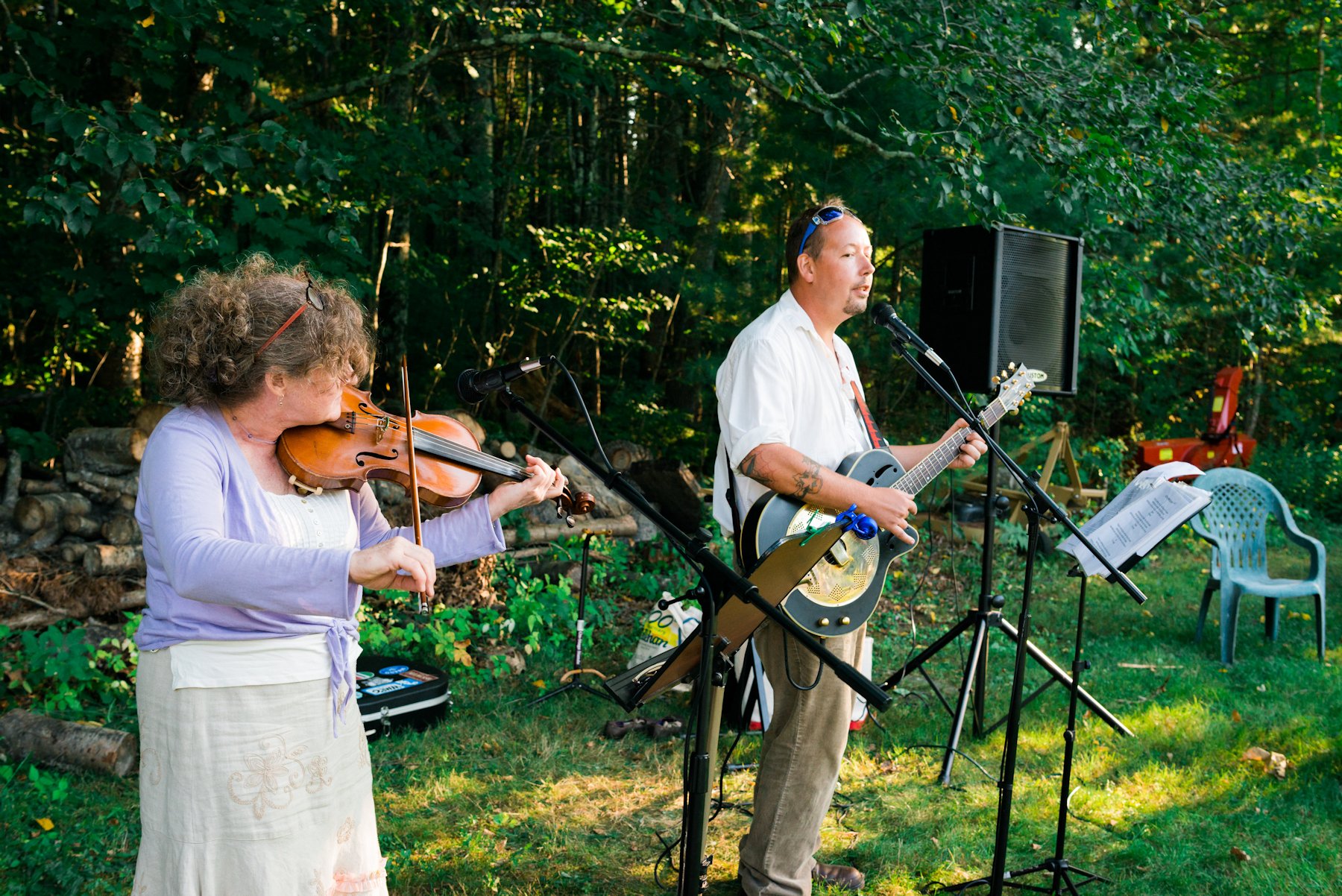 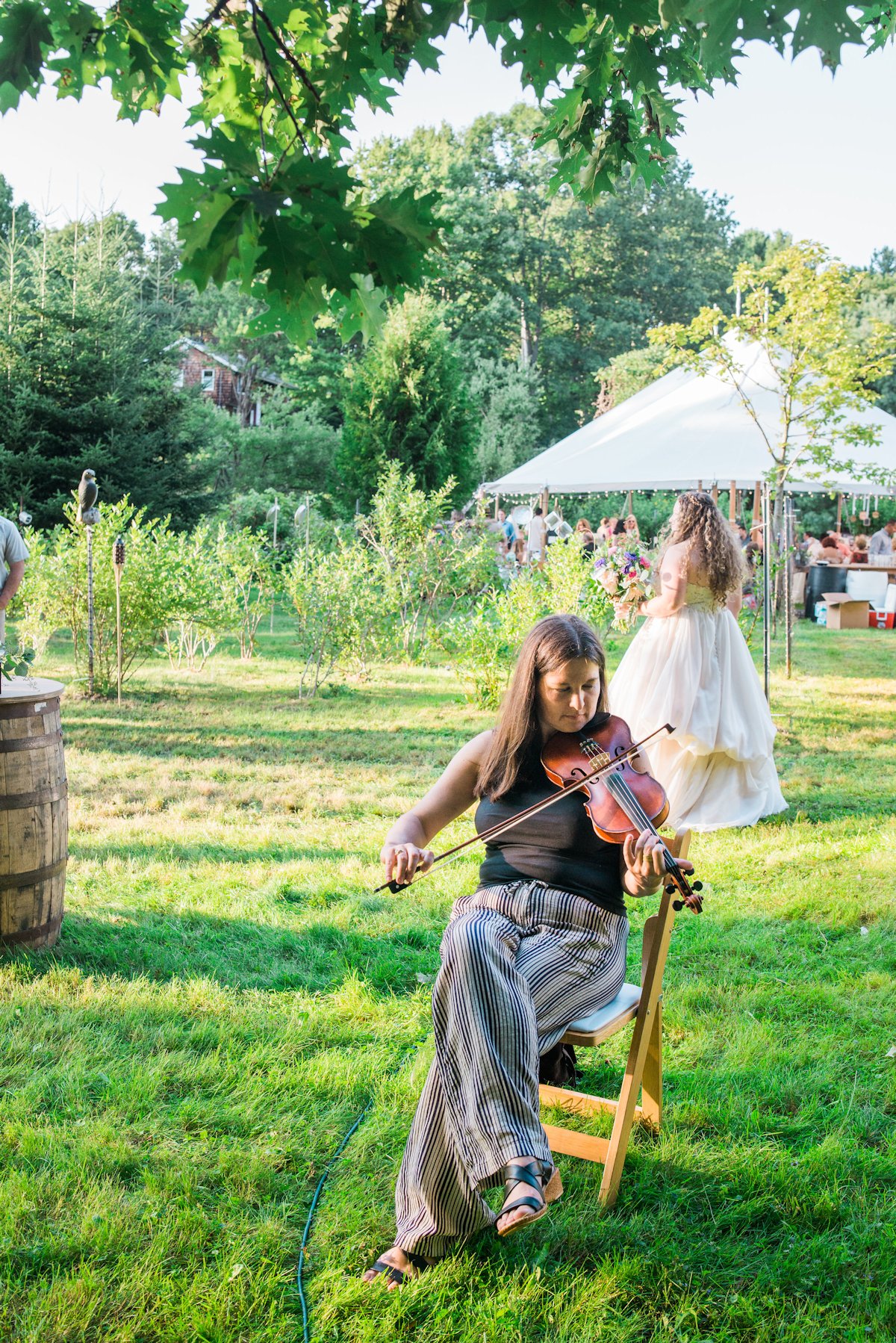 Cocktail hour was fun & relaxed. Kim’s dad wow’d the crowd by doing a couple jigs to the Irish folk tunes they were playing. Once everyone returned from pictures, I readied the guests to receive the Newlyweds, and brought them in with a soft (relatively) entrance to Led Zeppelin’s When The Levee Breaks. Joyce, the mother of the groom welcomed and thanked the family and friends, and gave a sweet warm  toast to her son and new daughter in law, then, following the Blood family tradition, Hannah, the youngest in the family in attendance said grace.

Lobster was on the menu! What else are you going to serve 100 of your closest friends and family when so many of them are from away and you want to show them a true taste of Maine!? They also offered Chicken & Steak, but there is no question Lobster was the favorite! The cooking was left in the always capable hands of my friends at CVC Catering. April and her team did an amazing job making sure everything was just right, and every guest was well taken care of.

When in Maine, It’s got to be Lobster! 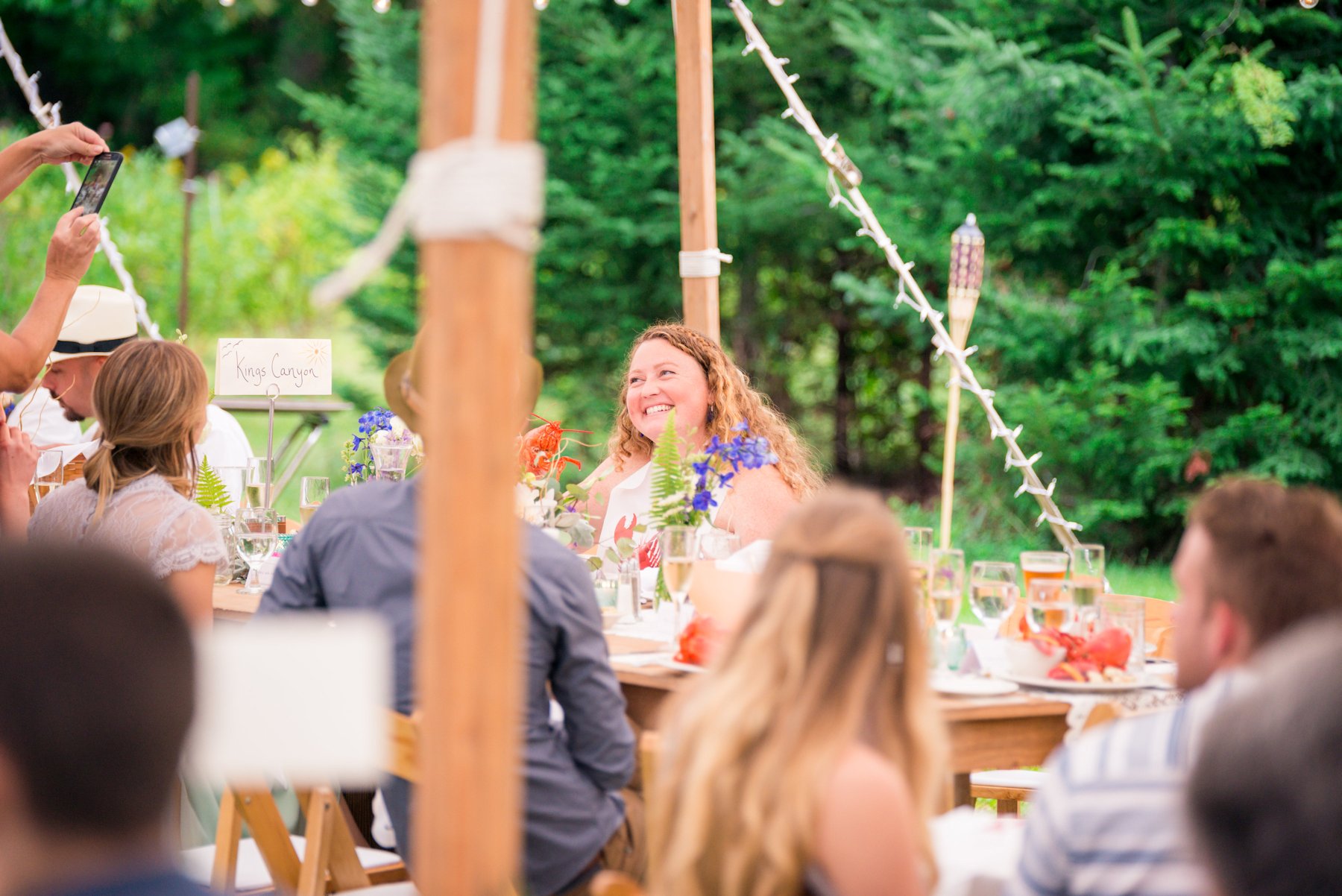 Once the newlyweds had finished eating, they headed to the field for a couple sunset photos, then it was time for more toasts, beginning with the father of the bride, then Best man, brother of the bride Jeremy, followed by a few close friends.

Father of the Bride’s toast 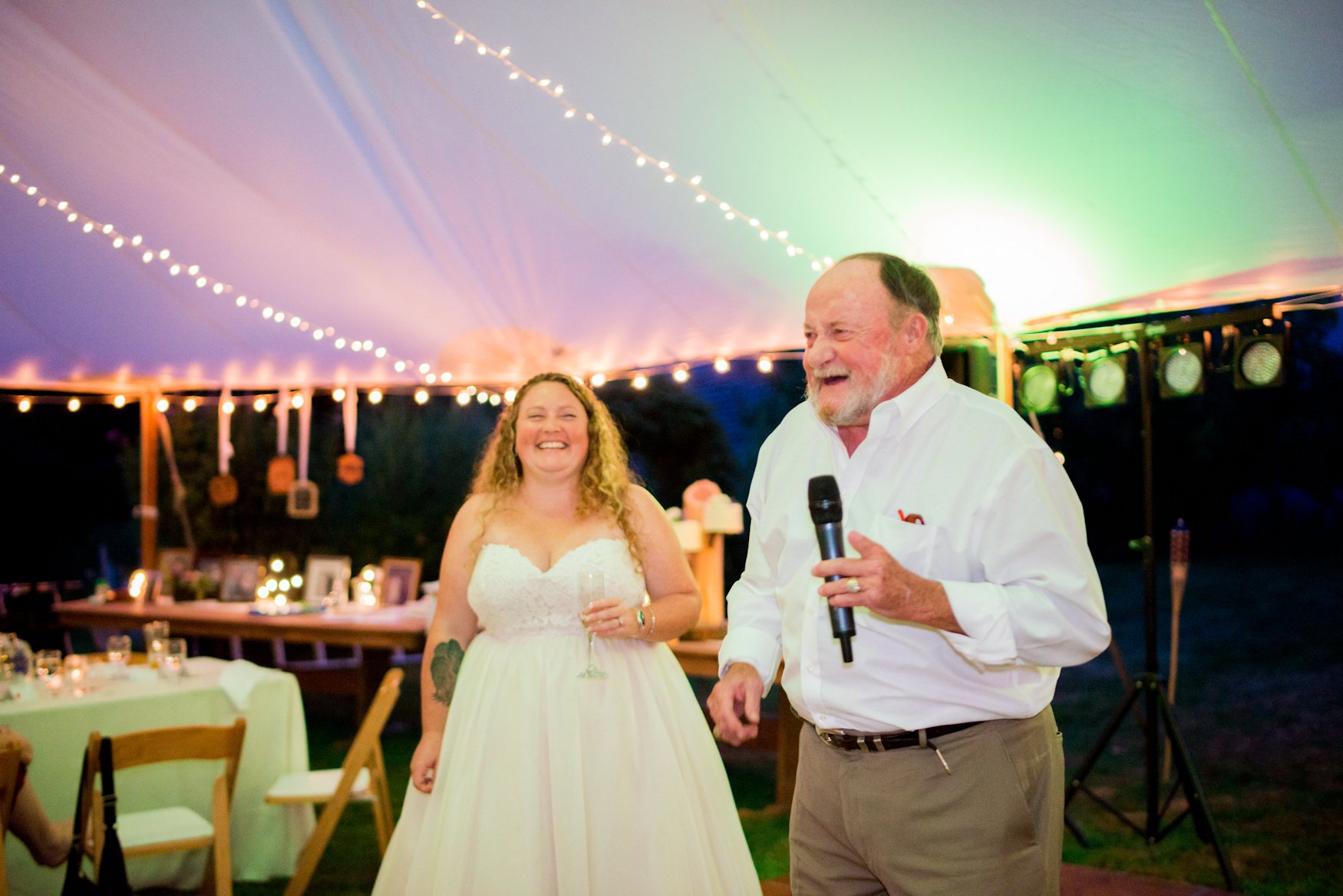 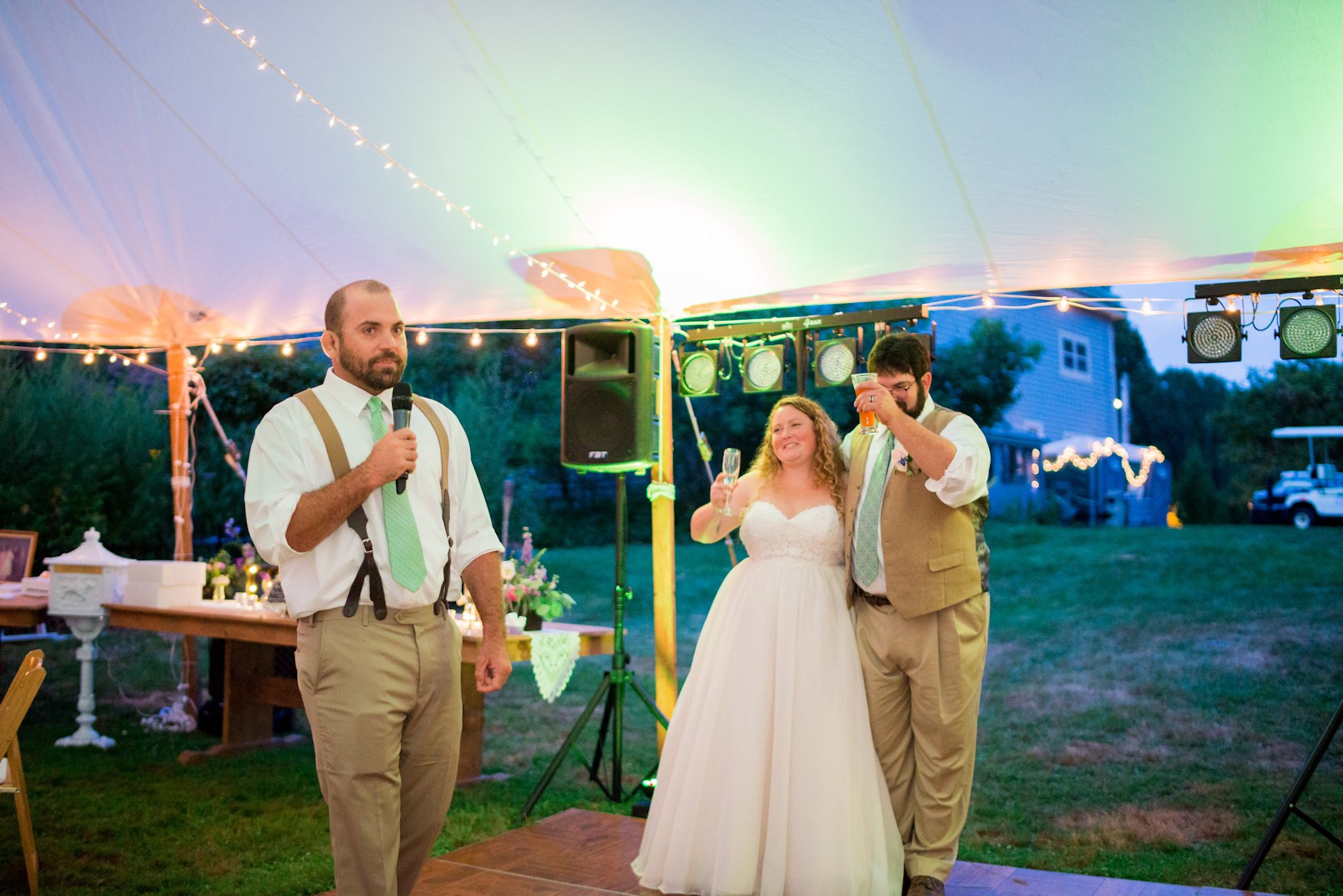 A toast to the newlyweds from the brother of the bride! 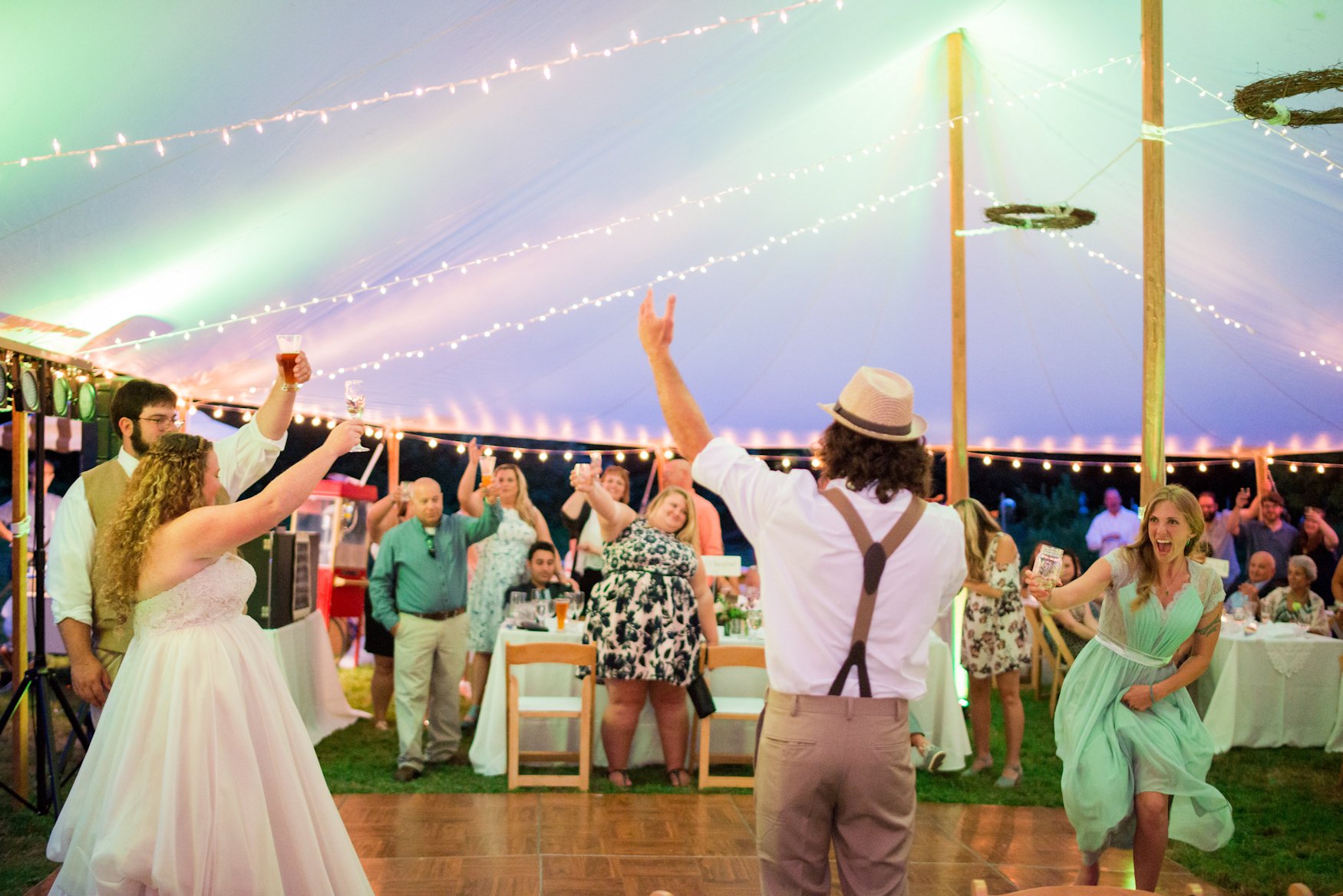 Then it was on to cake cutting, done to Not Fade Away by the Grateful Dead, and right into the first set of dancing!

Thanks to all for sharing our wedding day with us!

They were ready to dance! 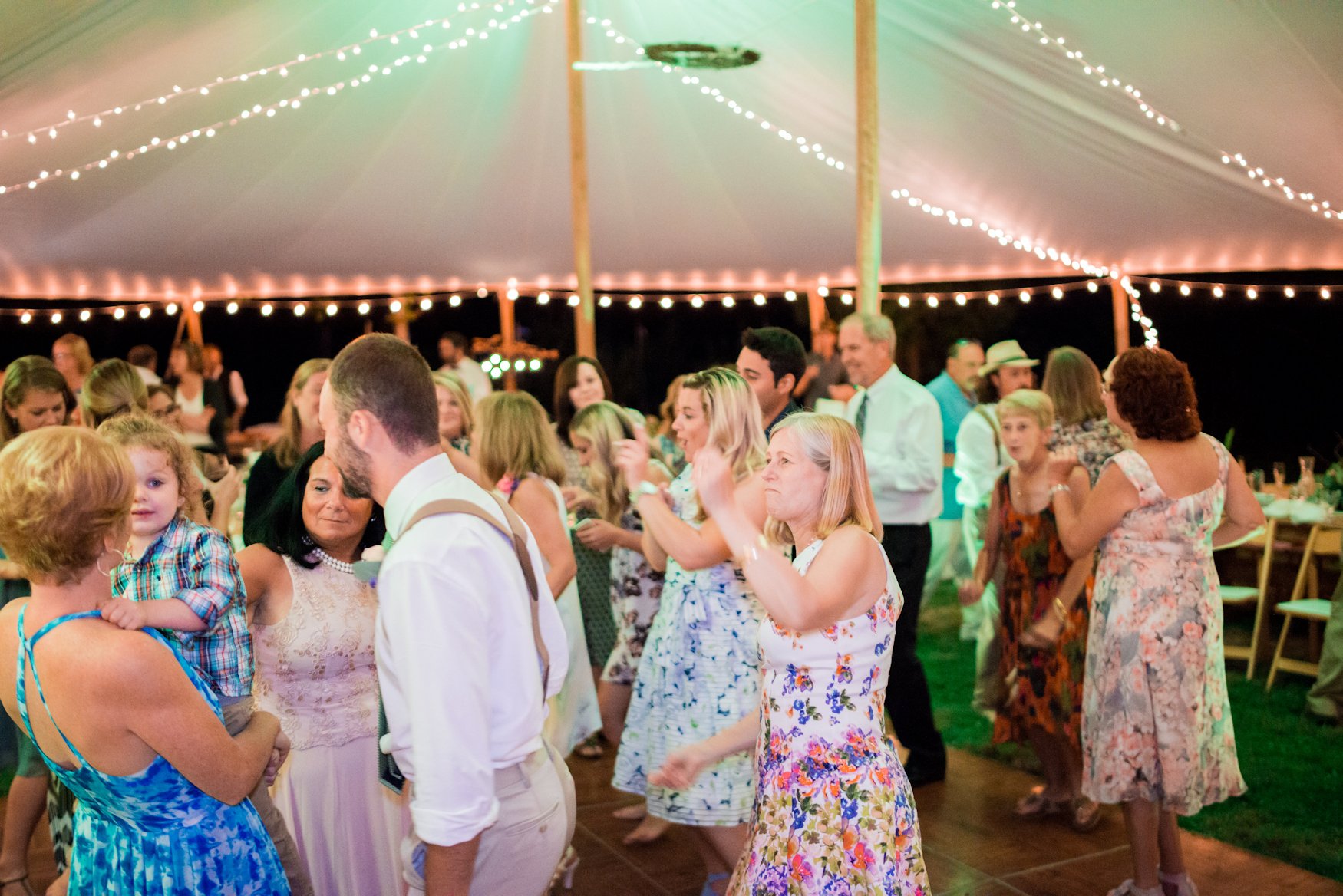 After about 15-20 minutes the center of the dance floor opened up and is was time for the first dance of the new Mr. & Mrs. Chris & Kim Blood! They chose the live recording of Pearl Jam’s version of Neil Young’s Harvest Moon. 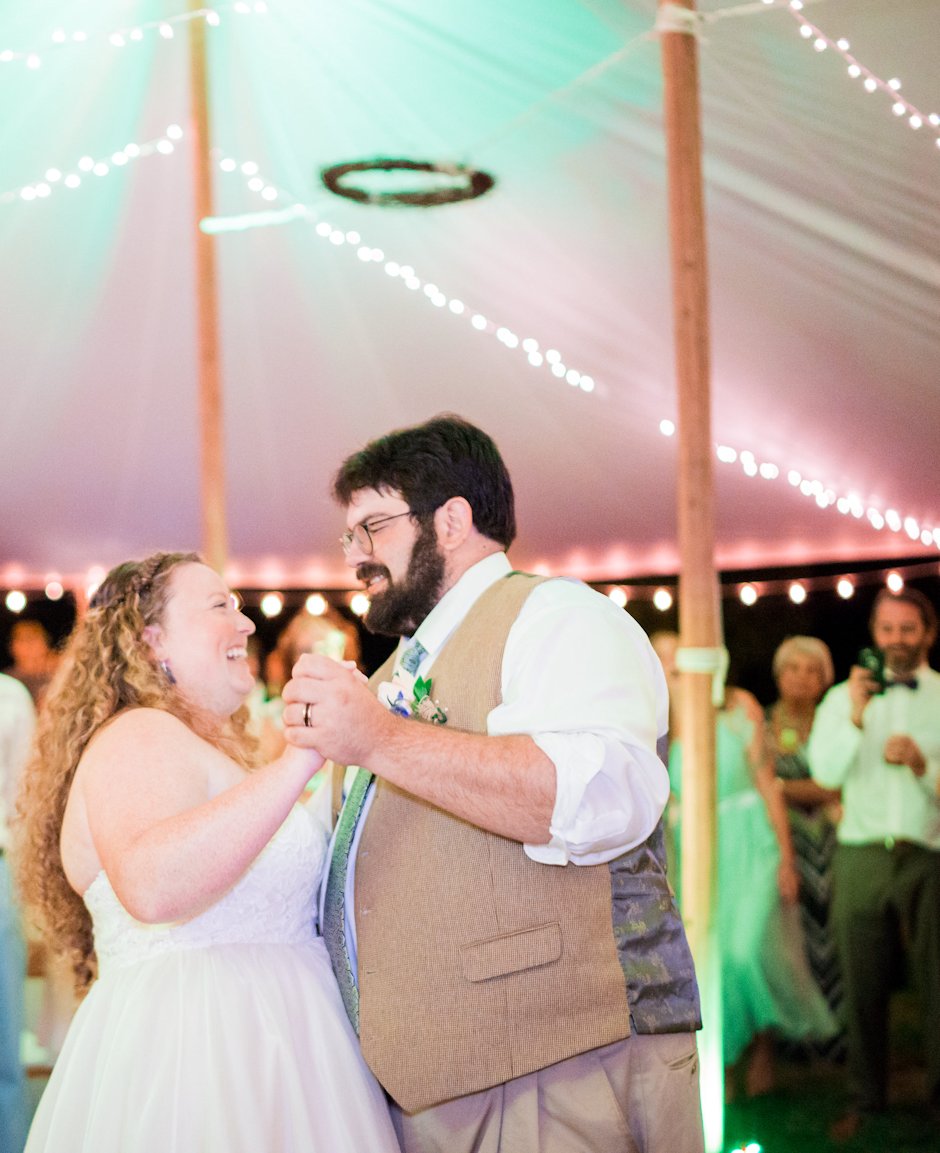 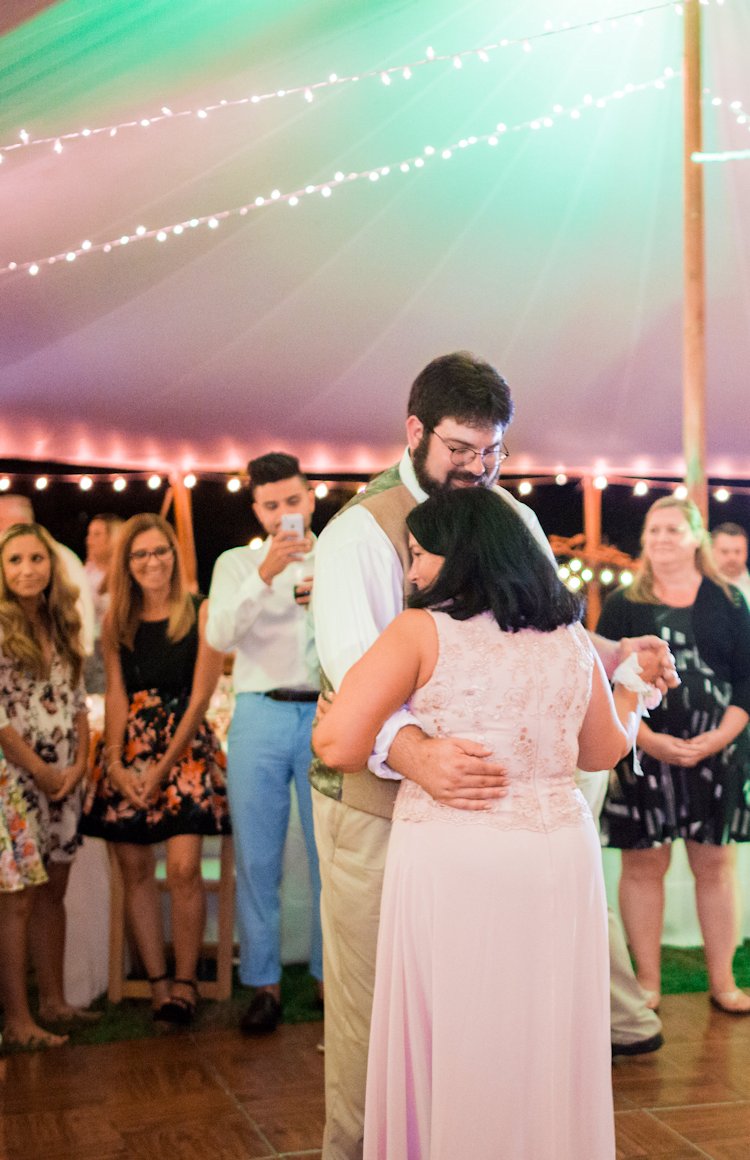 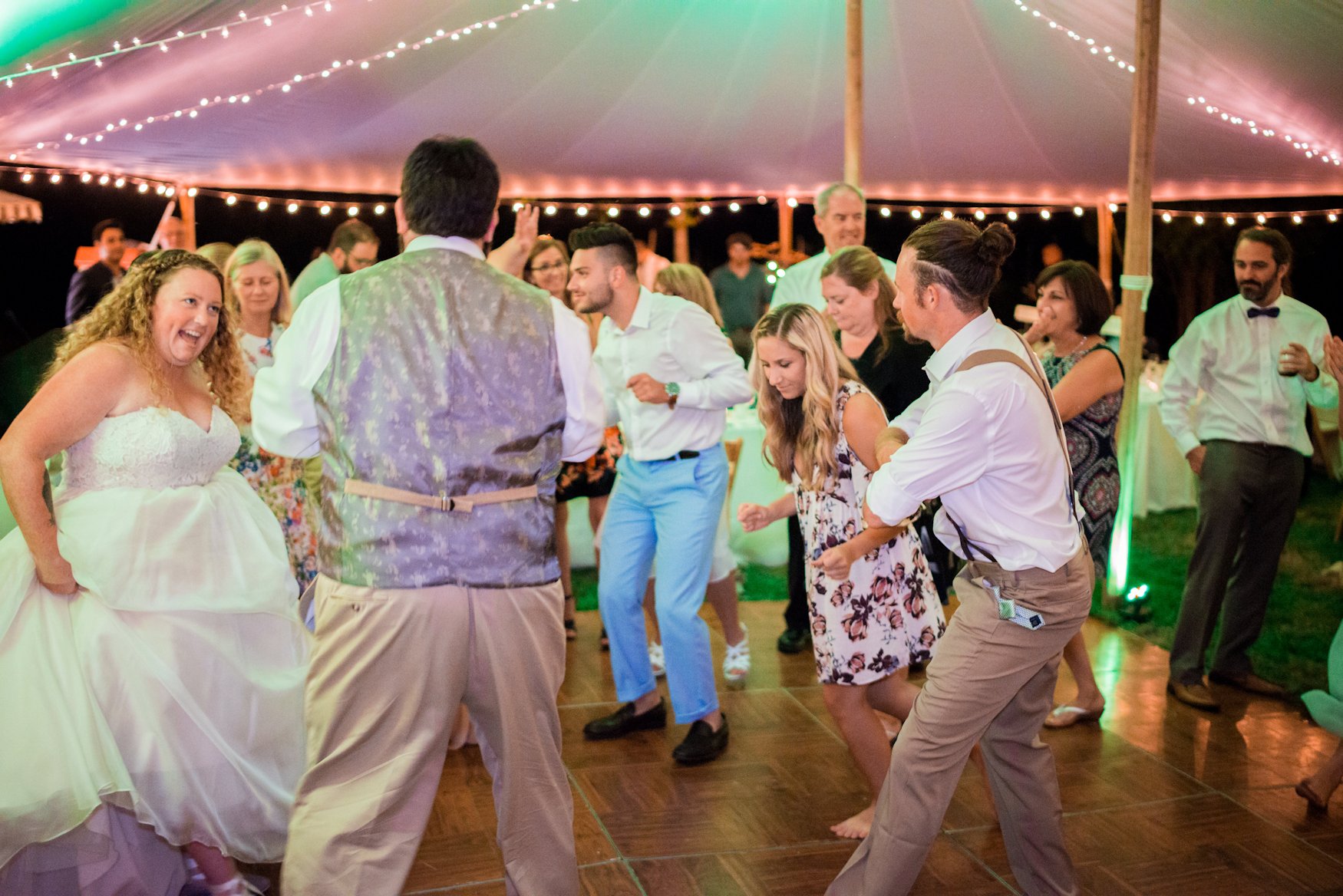 The groom and his mom followed with a song chosen by his mom, “A Mother’s Song” by Tony Carter, and then Kim danced with her brother in place of her dad as he wasn’t feeling well at the time. Finally a couple of traditional dances got dancing started off right, and they kept right on dancing through the night! Two families became one, and an epic celebration capped of an amazing day. Congratulations Mr. & Mrs Chris and Kim Blood! 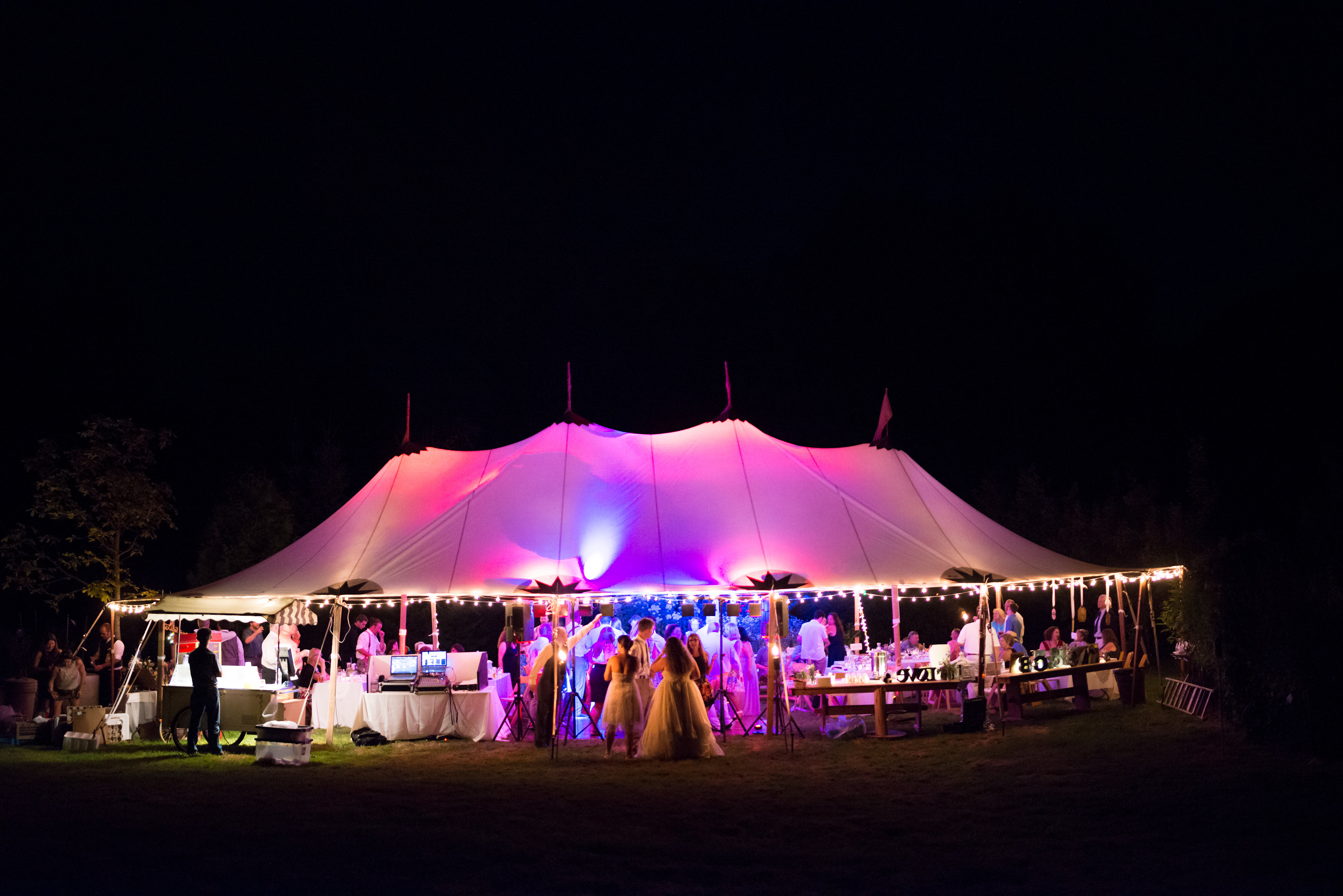 Partying late into the night!