On Saturday July 16, I had the pleasure of working with some fantastic people on a beautiful property in Standish Maine owned by the grandparents of the groom. It was a beautiful day, and these were two very close, loving, and talented families.

As I arrived at this beautiful stately home in Standish Maine to set up, there were two young pigs roasting on the only thing you would ever want to roast a pig on, that’s right, the Oinkmaster 8000! I knew we were in good hands for dinner, Dave Mallari from www.thepigkahuna.com and www.thesinfulkitchen.com was in control. BBQ is one thing, but if it’s a pig roast you want, you need The Pig Kahuna, there is no one better. 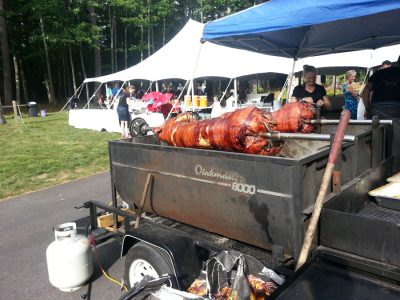 The ceremony was by the pond in a space made for ceremonies. The bridesmaids were in purple gowns, Groom and groomsmen were in grey tuxedos. The bride wore a beautiful simple white wedding gown and veil. As she walked down the aisle the piano played a beautiful rendition of Enjoy The Silence by Depeche Mode. The vows were beautiful, rings were exchanged, they were pronounced man and wife, and The Wedding March played as they headed off for pictures while their family and friends adjourned to the tent for BYOB cocktail hour and some classic jazz for ambiance. 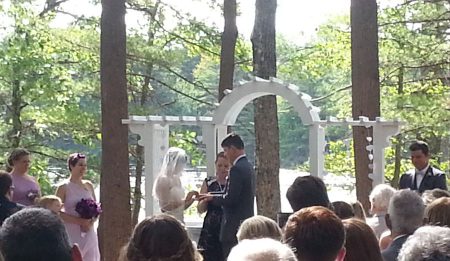 When the time came, I saw the bridal party begin to collect back by the garage. I headed over introduced myself, checked the names and order, got them lined up, and in they came to Rihanna’s “Diamonds”, Then, there was a pause, there were trumpets, the crowd rose as I announced The New Mr. & Mrs Ned & Brittany Boxer! as jump Around by house of pain played, their family and friends got out of their seats, and came out to the dance floor to greet them, they danced and hugged… and the music went away as the newlyweds came together for their first dance as husband and wife to a classic they both love, Unchained Melody by The Righteous Brothers. A minute or so in, the guests were invited to join and filled the dance floor.

Brittany danced with her dad to Humble and Kind by Tim McGraw, and about a minute in all fathers and daughters joined. Next, Ned danced with his mom to Wildflowers by Tom Petty. Mothers and sons joined after about a minute then dinner was ready. Before the buffet was open, there was a very important task for the groom – cut the head off the pig with a special knife just for the occasion, and bring it to the head table. The tables were names after the bride and grooms favorite date locations, from Peaks Island to Pemaquid Point and beyond. Once the buffet was opened Ned and Brittany’s guests were treated to a pig roast like you read about including baked beans and corn bread. Once everyone was fed, the best man gave a warm, funny, heartfelt toast, after which the bride surprised the groom with a small wedding cake brought into the tent by her mom, an awesome moment for a groom who is more accustomed to being the surprisor than the surprisee. Then dancing began… and didn’t end until 1AM with an exciting 3 song mini-concert of his bands favorite hits (all three band mates were there, and participated fully). This was an amazing, fun, beautiful day I won’t soon forget! Congratulations Ned and Brittany! 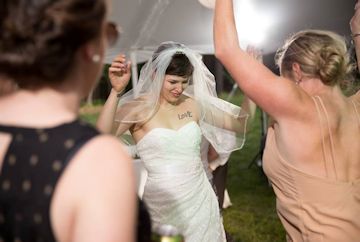 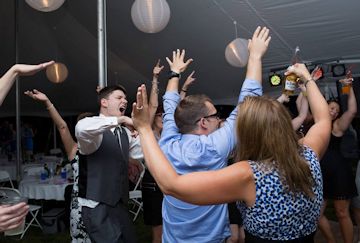 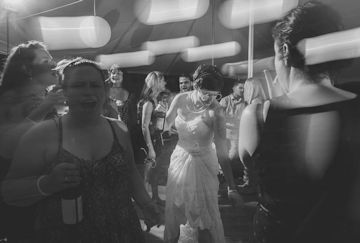